There are seven ways of getting to the summit of Kilimanjaro, but which of the routes up the mountain is best for you?

When hiking up Kilimanjaro you have the option of starting your ascent up seven different routes.  All Kilimanjaro routes vary in the number of days you spend on the mountain and where you start and finish your climb.  The main routes can be grouped according to the direction of approach and point of ascending to the crater rim.

At around 4000m, these paths all intersect with a circular path known variously as the Southern or Northern Circuit Path, depending on which side of the mountain you are on. You are then faced with three ascent paths to the summit – the Normal/Marangu Route, Barafu Route and Western Breach Route.

Each of these routes varies in terms of length, difficulty, what you will see along the way and, of course, cost. Regardless, each one will reward you with stunning panoramas and an incredible variety of scenic wonders. Read on to discover the best route for you to summit Kilimanjaro.

It therefore makes sense to choose a route which gives you the best opportunity to acclimatize properly before your final push to the Summit.

Although there are 7 official routes to climb Kilimanjaro, we urge our climbers to opt for one of the following which allows for an extra day on the mountain for acclimatisation.

In our opinion, the optimal way to climb Kilimanjaro is to spend 8 days climbing, acclimatizing, learning how to walk and breath properly. After all, your goal is to climb Kilimanjaro, stand on the roof of Africa and enjoy the whole experience – which is why our first choice is an 8 Day trek via the Lemosho Route.

The Lemosho Route – “explores a quieter side of the mountain” 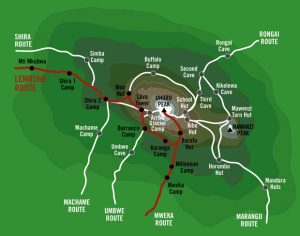 If time schedules and budget don’t tally with an 8 Day trek then we strongly suggest you look at going for the 7 Day Machame Route or 7 Day Rongai Route options. 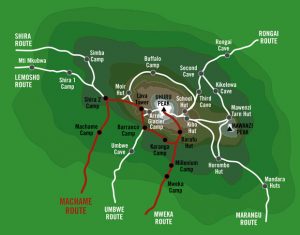 The Machame route is the most popular and therefore also one of the busiest routes on Mt. Kilimanjaro. Due to the ascent and descent over its duration – following the golden rule of ‘climb high and sleep low’ – the Machame Route offers some of the best acclimatization and the greatest summit success. The Machame Route is definitely recommended for people experiencing high altitude mountaineering for the first time. It takes you in some of the best geological features on the mountain. Descent is via Mweka Route. A minimum of 6 days is needed, but for more comfort and to increase your chance of success, 7 days are recommended.

Other things to consider when choosing your route

What are your time constraints?

As we mentioned earlier, in order to acclimatise properly, you want to take as many days on the mountain as possible. Climbing via the Lemosho route would ideally consisit of 8 days on the mountain which would make it a 10 day trip. It is possible to climb via the Machame and Rongai routes in six days but success rates are considerably lower.

When is the best time to climb?

The best time to climb Kilimanjaro tends to be the warmest and driest months. Until recently the weather system on Kilimanjaro was very predictable but like everywhere else in the world the weather system has been changing. Over the last few years the rainy season seems to have been arriving early. It is hard to say whether this will last but it has been noted over the last few seasons. The rainy season shouldn’t put you off visiting Kilimanjaro. It is not always as wet as you may expect and there are some advantages. The mountain is very quiet during the raining season and for those hoping for snow on the summit it can usually be guaranteed during the rainy season.

What are your budget restrictions?

Obviously, the more days you spend on the mountain, the more expensive it will be. However, compromising that extra day to get the costs down may jeopardize your chances of reaching the summit.  You will kick yourself if you did not make it due to not acclimatising properly.

Is it all worth it?

Absolutely! Having ascended through 5 climatic zones and overcome the many challenges, climbing Kilimanjaro and standing on the summit, the Roof of Africa, is one of the most incredible feelings you’ll ever experience.

A combination of amazing vistas & scenery with varied habitats, flora and landscapes make Kilimanjaro an exceptional mountain to climb. Reaching the summit will evoke your emotions and leave you with a sense of achievement as big as the mountain itself.

Even if you don’t make it to the summit, you’ve still had an amazing walk on the world’s highest free-standing mountain, and that’s something to celebrate.